SAA as a biomarker of IBD 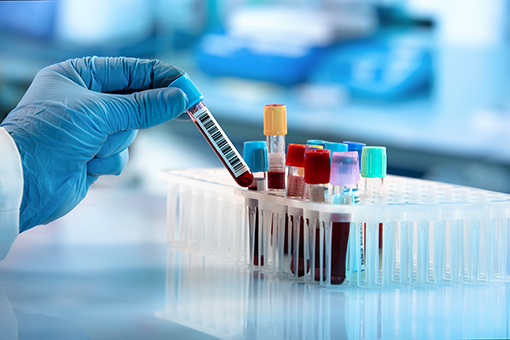 Inflammatory bowel disease (IBD) needs long-term management through assessing and monitoring disease activity, however, frequent examination via colonoscopy could cause high burden both physically and costly on patients. The patients are often children and young people. Recently, non- or less- invasive methods might have been widely used for monitoring disease activity of IBD: fecal calprotectin and C-reactive protein (CRP) in blood test.

Fecal calprotectin has been used as a non-invasive test whose levels highly correlate with endoscopic indices of disease activity [*1]. However, it might be difficult for patients to have bowel movement and get the result at a hospital on the same day of periodic checkup.

CRP is measured as a less invasive blood test that can reflect the level of mucosal inflammation levels. On the other hand, it has low sensitivity to predict active disease in ulcerative colitis (UC), whereas fecal calprotectin is the more accurate marker which correlate greatly with endoscopic inflammation in UC [*1].

SAA is an inflammation marker like CRP, but the sensitivity could be higher and could be a familiar test in management of IBD.

Serum amyloid A (SAA), the same as CRP, is one of the acute phase proteins (APP) synthesized in the liver and exists in blood. Some research indicate SAA is a more sensitive serum biomarker in monitoring the disease activity of UC and Crohn’s disease [*2, 3].

As described above, there are several studies that anticipate the potential of SAA for predicting mucosal healing of IBD. SAA can be measured quickly with a clinical chemistry analyzer like CRP. If further research is conducted, the utility value of SAA may expand in the future, and it might be one of the options that can reduce the burden on IBD patients.

Penna et al. (2021) mentioned that “the sequential usage of fecal calprotectin and CRP showed greater specificity (82%) when compared to the use of these markers alone. ... Fecal calprotectin and CRP tests are useful to differentiate patients in remission from those in activity, because these tests presented good accuracy in the diagnosis of inflammatory activity in CD.” [*7] In addition, the study suggests the algorism that the combined or consecutively fecal calprotectin and CRP are performed, will allow to make a decision with a great degree of certainty and reduce the number of unnecessary colonoscopies.

In our publication searches, we could not find results in the sequential usage of fecal calprotectin with SAA. 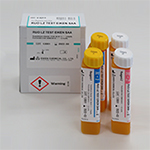 Serum amyloid A kit for general clinical chemistry analyzers.
Research use only. 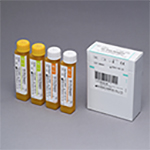 *LZ-SAA ‘Eiken’ is currently for research use only. OC-FCa™ Reagent is for in vitro diagnostics.