In some regions of today’s world, people are unable to obtain sufficient medical care due to a wide variety of social factors, including medical environments, medical systems, public hygiene, education and income disparity. The Eiken Group regards improving access to medical care in such regions as one of its most vital social responsibilities. The EIKEN WAY identifies “provision of products and services that enable anyone to obtain clinical testing anywhere, anytime with confidence” as one of its responsibilities to stakeholders. To protect the lives and health of people around the world, we are constantly working to improve those products and services, to contribute to the achievement of universal health coverage (UHC).

Two of the world’s three great infectious diseases, tuberculosis and malaria, have good prognoses if diagnosed early. Unfortunately, in many developing countries, inadequate access to medical care means that the necessary clinical testing is not performed, with the result that the disease proliferates and many people lose their lives. Moreover, for a group of diseases known as neglected tropical diseases (NTDs), it is known that often effective treatments fail to be established, and access to the necessary medical care is not made available, simply because the market value of such treatments is low. One of the targets of the Sustainable Development Goals (SDGs) is to end the spread of these infectious diseases by 2030. To provide a solution to this issue, the Eiken Group developed a unique technology called the LAMP method. Clinical testing systems that apply the LAMP method to test for these infectious diseases enable developing countries to improve access to medical care, thereby avoiding social losses from these afflictions and contributing to economic development. The Eiken Group is also collaborating with governments, health authorities, universities, government agencies and other bodies in each country in efforts to establish and broaden adoption of clinical testing systems.

Every year some 10 million people worldwide contract tuberculosis. For approximately 1.5 million of these sufferers, the disease is fatal. Eiken Chemical developed a tuberculosis detection system, TB-LAMP, using an original Eiken Chemical technology called the LAMP method. In 2016 the World Health Organization (WHO) included this method in its guidelines, recommending it as a replacement for the smear test (sputum smearing test). TB-LAMP is a genetic test used to detect mycobacterium tuberculosis complex (MTBC). In this test, DNA is extracted from the sputum specimen using a dedicated DNA extraction kit (“PURE DNA Extraction Kit”), propagated using minimal equipment and observed under fluorescent light. A decision on the presence of tuberculosis can be made in just an hour and a half. The system can be used with solar panels and batteries, so its use is expected to spread in developing countries with poor electrical infrastructure and in areas where medical services are sparse. In collaboration with governments and healthcare authorities in each country, the Eiken Group is continuing to advance the inclusion of this system in anti-tuberculosis policies and guidance (following proving tests) and to establish screening programs.

Introductory video on the use of TB-LAMP (Cameroon)

Malaria is a global health issue that threatens millions of people around the world, particularly in tropical countries. In 2020, this disease afflicted 241 million people, killing an estimated 627,000 people. The vast majority of these, about 70%, were children under the age of five. Worse still, in a worst-case scenario of the impact of COVID-19, progress against malaria may be set back two decades.

Eiken Chemical is prepared to supply the world with detection reagents for three types of malaria plasmodium, which it has already developed using LAMP: Plasmodium malariae, Plasmodium falciparum and Plasmodium vivax. Malaria-LAMP can detect P. malariae with high sensitivity in just an hour and a half. Leveraging this advantage of high sensitivity, Malaria-LAMP can accurately identify malaria patients who are often overlooked by more generally used methods such as microscopy and immunochromatography. Moreover, the exceptional sensitivity of Malaria-LAMP enables it to identify individuals who have just a tiny infection load and exhibit no symptoms. The ability to find such patients in surveillance activities using Malaria-LAMP is expected to prove useful in eradicating malaria in certain regions. By deploying these reagents in as many malaria-afflicted countries as possible, Eiken Chemical aims to contribute to antimalarial efforts worldwide.

“Neglected tropical diseases (NTDs)” refers to diseases caused by parasites, bacteria, viruses, fungi, etc. that proliferate mainly among the poorest segments of the populations of developing countries, particularly in tropical and subtropical latitudes, whose poverty makes the market for pharmaceuticals to treat such diseases insufficiently attractive to stimulate research and development on drug production. The 20 diseases defined as NTDs by the WHO are said to infect over 1 billion people worldwide, representing a serious social problem.

Thanks to its simplicity and speed, the LAMP method is expected to be applied in the detection of pathogens for the NTDs. In fact, application of the LAMP method is already attested in academic papers for almost all NTD pathogens. Marshaling the technology it cultivated in developing TB-LAMP and Malaria-LAMP, Eiken Chemical is developing LAMP reagents for detection of a number of NTDs. For example, in efforts to eradicate Human African Trypanosomiasis (HAT, also known as sleeping sickness) in connection with Goal 3 of the UN SDGs, a LAMP reagent is being used that detects the pathogen for HAT, a parasite called Trypanosoma brucei, with high sensitivity. Going forward, Eiken Chemical aims to move forward with applications to NTDs other than HAT, such as leishmaniasis and Chagas disease. Our aim is to provide all sufferers of NTDs with access to effective treatment based on rapid, accurate diagnosis. 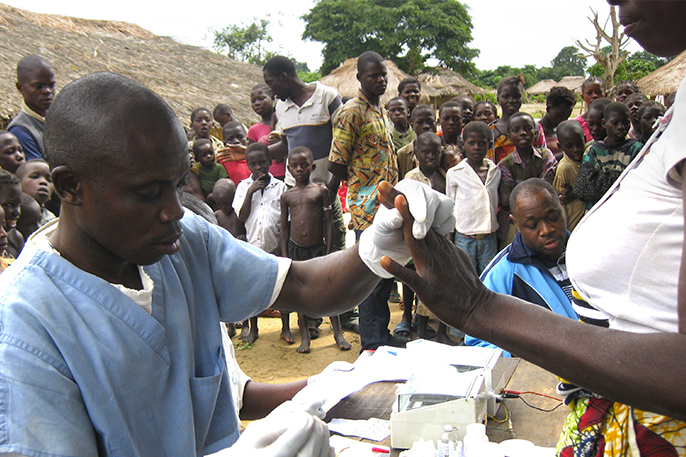 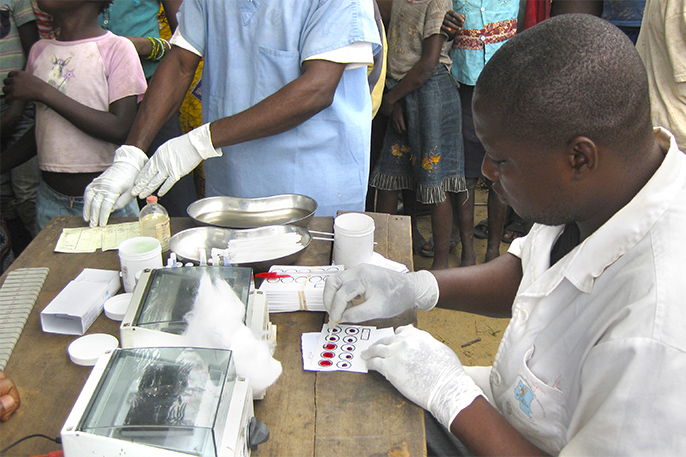 Signing of “the Kigali Declaration on neglected tropical diseases (NTDs)” 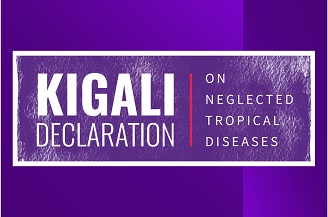 Eiken Chemical has signed the Kigali Declaration, an international public-private partnership for the control of neglected tropical diseases (NTDs). The Declaration is a high-level declaration in which stakeholders pledge to work together for the elimination of NTDs. With the signing of the Declaration, we will further strengthen our collaboration with global partners to provide people affected by NTDs with access to rapid and accurate diagnosis and more effective treatment based on that diagnosis, and to promote efforts to achieve the World Health Organization (WHO) Roadmap 2021-2030 for the control of NTDs. We will continue to promote our efforts.